New trainees to the Child and Adolescent Integrative Psychotherapists 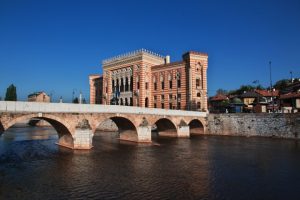 New trainees to the Child and Adolescent Integrative Psychotherapists

On the 30th of September 2017, in Bosnia and Herzegovina, we promoted the first 9 trainees to the Child and Adolescent Integrative Psychotherapists

It is important to emphasize that, even today, the issue of child and adolescent mental health does not hold the place it should, which is best seen analyzing the existing psychotherapy courses, all directed towards adulthood problems, even though most of those problems have their outbreak in childhood. The complexity of child and adolescent psychotherapy arises from the dependence of children on their families and their evaluations, opinions, attitudes and beliefs, as well as the environment the child is growing up in. Psychotherapy should, among children, include the family, school and the environment, which often faces resistance. Unfortunately, we are much more aware of the trauma that arises from different forms of abuse, family dissents, wars, refugees and exiles, which withholds children their basic needs and requires a well-educated approach filled with love, knowledge and understanding.

The first nine psychotherapists in Bosnia and Herzegovina opened a path to the future child and adolescent psychotherapists and the interest and presence of Assistant Minister for International Security and Coordination of Strategy Development of Ministry of Health, television, journalists, school, education and training representatives points out the awareness of the problems with children and adolescents, in terms of the need to induce further education and make more programs with the goal of creating a happy childhood for children and adolescents and preserving their mental health.

In 2015, BHIDAPA launched the first accredited European educational program in BiH for children and adolescents of Integrative Psychotherapy and Counselling, in accordance with European Standards and recommendations of the World Health Organization (WHO).

Mirela Badurina, a psychotherapist, pointed out that the graduates completed their studies under the program that the Bosnian-Herzegovinian Association for Integrative Child and Adolescent Psychotherapy (BHIDAPA) initiated for obtaining a degree in children’s and adolescent psychotherapy bearing in mind the importance and needs for that such trained professionals.

– Research shows that every fourth child of early adolescent suffering and at risk of developing mental disorders. On the other hand, in Bosnia and Herzegovina is a lace of personnel and professionals whose working with children and adolescents. We do not have more time, we need to work together and  to cooperate well to preserve the child – said Badurina.